I did some research at the technology lab at the Purdue University West Lafayette Campus in 2004 and wrote this paper:

Poets have romanticized the eyes over centuries. The beauty of the eyes has been voiced through civilizations. Many songs have been written about them, all aspects of the eyes have been glamorized. The Egyptians ceremoniously decorated the eyes, the Hindus apply kajal to highlight the eye contours, and the western civilizations called eyes the window to the soul.

Researchers today look at the eyes with from a different perspective. One such researcher is Richard P. Wildes. He looks at human eyes to identify people. The biometric based technology is called iris recognition. It is suggested that the iris is as distinct as a fingerprint or the patterns of retinal blood vessel.

In the 1997 article, Wildes investigates the iris relative to uniqueness and identification. He explains the structure of the eye and what makes the iris unique and identifiable with repeatability. He states:

The iris is composed of several layers. Its posterior surface consists of heavily pigmented epithelial cells that make it light tight (i.e. impenetrable by light). Anterior to this layer are two cooperative muscles for controlling the pupil. Next is the stromal layer, consisting of collagenous connective tissue in arch-like processes. Coursing through this layer are radially arranged corkscrew-like blood vessels. The most anterior layer is the anterior border layer, differing from the stroma in being more densely packed, especially with individual pigment cells called chromataphores. 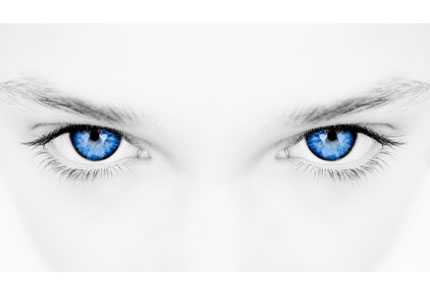 The multi-layer structure of the iris together gives it the unique appearance. Wildes (1997) cites literature which states that the appearance of the iris does not change with the age of the individual. This is important because repeatability is guaranteed across longitudinal sections of studies and research. Also there is guarantee that the iris will remain relatively unchanged for recognition purposes.

Wildes (1997) explains the process of image acquisition, iris localization, pattern matching and recapitulation. He states that the “major challenges of automated iris recognition is to capture a high-quality image of the iris while remaining noninvasive to the human” (Wildes, 1997, p. 1351). He explains the problems associated with iris illumination when the acquisition of the image is to take place and compares the illumination approach adopted by Daugman, LED-based, with his own which is a diffuse source and polarization in conjunction with a low-light camera (Wildes, 1997, p. 1353).

Wildes (1997) also explains the issues with iris localization, he states:

It is necessary to localize that portion of the image derived from inside the limbus (the border between the sclera and the iris) and outside the pupil. Further, if the eyelids are occluding part of the iris, then only that portion of the image below the upper eyelid and above the lower eyelid should be included. Typically, the limbic boundary is imaged with high contrast, owing to the sharp change in eye pigmentation that it marks. The upper and lower portions of this boundary, however, can be occluded by the eyelids. The pupillary boundary can be far less well defined. The image contrast between a heavily pigmented iris and its pupil can be quite small.

Wildes (1997) explains further, that while the pupil typically is darker than the iris, the reverse relationship can hold in cases of cataract. He talks about the eyelid contrast as a variable which depends on the relative pigmentation in the skin and the iris. The irregularities of the eyelid boundary due to eyelashes can cause difficulty in localization of the iris. It is obvious that the localization of the iris is no simple matter. There are lots of variations in the process of capturing the iris.

The iris recognition system proposed by Wildes (1997) uses four goodness-of-match measurements that are calculated by the previous stage of processing. It becomes possible to conduct 1:1 comparison and 1:N matching. It is possible to enroll an individual without invasion; just a video camera can capture enough detail to recognize the individual under scrutiny or observation.

It is quite amazing that biometrics of the eye have enabled automated systems that realize the potential of a century old suspicion that the iris can be used to recognize human beings. Wildes (1997) has contributed significantly to the field of iris recognition and moved the field of biometrics one step further.