I wrote this in 2004 when I purchased a car with Voice Activated controls. It was amazing back then.

I am alone in my car cruising from Carmel, Indiana to Purdue University in West Lafayette, Indiana for a weekend class. It’s early in the morning and I wonder if I will make it to class on time. After about ten minutes on interstate 65, I ask impatiently “How long to the destination?” Honda’s advanced navigation system gears into action; it promptly queries the Global Positioning System (GPS) satellites and local GPS repeaters for the vehicle’s current co-ordinates. It then averages out the expected speed based on current averages on the interstate, state roads and inner streets and responds back in a pleasant natural female voice “It is about forty two minutes to the destination”. I am definitely going to be late for class.

Speech recognition technology, once a domain of fantastic science fiction, is a reality today. This technology has begun to touch our lives on a daily basis in our automobiles. A recent article (Rosencrance, 2004) reports on the speech recognition technology in Honda automobiles. The system has the ability to take drivers’ voice commands for directions and then respond with “voice-guided turn-by-turn instructions, so they don't have to take their hands off the wheel” (Rosencrance, 2004), said Alistair Rennie, vice president of sales for IBM's pervasive computing division. Rennie added that this “goes significantly beyond what was done before in terms of being able to deliver an integrated speech experience in a car” (Rosencrance, 2004).

Using IBM's Embedded ViaVoice software the system can recognize spoken street and city names across the continental United States (Rosencrance, 2004). The system recognizes almost every task a driver may want to accomplish while on the road. Commands that can operate the radio, compact disk (CD) player, climate control, defrost systems. It can recognize more than 700 commands and 1.7 million streets and city names. All this is possible without the driver looking away from the road. 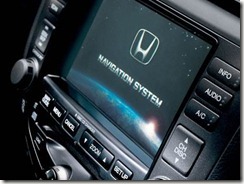 “Display on” I prod along. The in-dash LCD screen lights up (see Figure 1). I glance at it for a second – there is a map of the state of Indiana and a symbol inching up north towards the destination - a red bull’s eye on the electronic map. I will get there soon. I say “XM Radio Channel twenty”. The integrated satellite radio starts up and plays high quality music.

Not before long the speech system fades down the music volume and then articulates in the same pleasant voice “Exit approaching in two miles – stay to the right”. The ‘exit mile countdown’ goes on every half a mile until the car actually takes the exit. In about ten minutes I pull into the parking lot. I am running late by ten minutes – the class has probably begun and the exam papers probably handed out to the cohort. Before I turn off the engine, I finally ask, “Will I make a good grade?” There is no response from the system this time.